We provide programs and tools for the betterment of the community 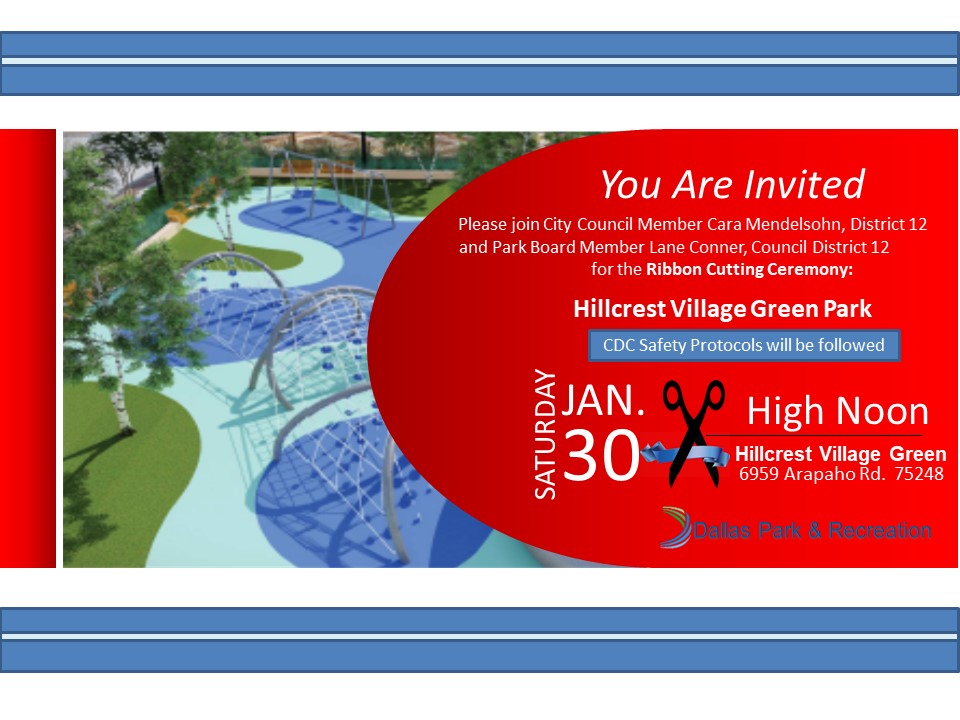 The North Dallas Neighborhood Alliance board held their monthly meeting via Zoom on Wednesday, January 13th.  The board decided that dues for 2021 would be waived, since the usual general meetings would not be able to be held for some time.  Newsletters from district 12 Councilmember have given residents updates on city concerns and projects.

Board member Rod Scales will attend a meeting next week concerning the placement of shrubbery around cell tower bases on the Preston Ridge Trail.  He will also participate in a city steering committee to address concerns about maintenance of sidewalks throughout the city.  Questions were raised about who “owns” and is responsible for residential sidewalks.

Paul Landfair reported that crime states for North Central Division had been fairly flat with non-violent crimes down somewhat.  The board agreed that communication should be sent to State Representative Ramos asking her to sponsor a change in the privacy law, so that some information could be made available about crimes committed to/by juveniles.   He participated in the citizen selection of new police Chief Eddie Garcia and felt the process was positive.

Jean Schobert announced that city meetings addressing off-street parking regulations had been cancelled.  The next consideration of these will take place on January 21st at the city ZOAC meeting.  The city’s consideration of short term rental and accessory dwelling unit regulations are integrally tied in with parking concerns.

There was no update on the zoning applications for residential units at the northwest corner of Alpha/Hillcrest.  The properties (hotel west of Preston off George Bush in district 12 and Gateway Hotel at Coit/635 in district 11) acquired by the city are to be used for those recovering from Covid who do not have other places for recuperation.  The zoning change request on Mapleshade east of Coit is for development of moderate income senior housing.

Board members expressed concern about the number of panhandlers and homeless that are evident throughout the districts, but especially at Forest/Coit.  The lack of this kind of activity in our surrounding suburbs brings up questions of why Dallas is unable to address the proliferation.

The board expressed appreciation to Mark Goodwin (Highlands North) and Janet Marcum (Northwood Hills) for attending the board meeting as guests.

NDNA strives to strengthen neighborhoods by:

The NDNA meetings include programs on code compliance, beautification, low-income housing, curbside recycling, multi-family zoning, liability, and homeowner boards. Associations are kept abreast of meetings and news through our website, email, and the mailings.

If your homeowner or neighborhood association would like to become an NDNA Member, or if you are a current member and have questions or need to update your registration, please click on Contact Us.

The city of Dallas is divided into seven community code districts with offices located throughout the city. The districts are responsible for the enforcement of over 900 city ordinances intended to keep your neighborhood clean and code-compliant. Community Code addresses concerns both proactively and by citizen requests submitted through 3-1-1.

You can look up your district here on this community code district map.

If you need assistance identifying your code district, please call 3-1-1 or any district office. More information can be found on the city services website.